Arduino is a great tool when it comes to ease of use and applications. Creators, hobbyists, and students from all over the world use Arduino to make all kinds of projects. Arduino-based projects can be as simple as breadboard prototyping. But sometimes you need a permanent fix! like a PCB board. So that you can easily plug in the Arduino without worrying about the wires connections and all.

And in this blog post, we have covered the 3 Best Arduino-based projects using custom-made PCBs. So, let’s jump right into it with our first project.

In this Arduino based project, a self-balancing robot having two wheels and the PCBs (manufactured through PCBWay) as its body has been developed. The project is based on Arduino Nano and inspired by Sean HodginsPiddyBOT. This project is a great way to learn about Proportional Integral Derivative (PID) controllers as it is capable of incorporating complex codes with a closed-loop system using encoders or the IR sensor slots. In further sections, the pre-requisites to make the project, its specifications, features, the software required, and further improvements are discussed. 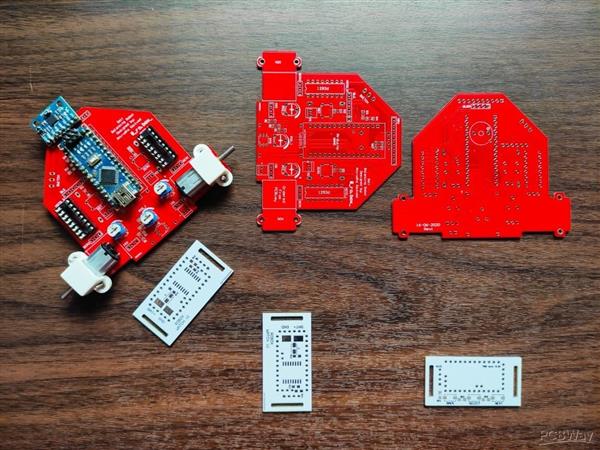 Specifications of the PCB:

The PCBs have been designed in Altium Software and contain potentiometers in order to tune PID controller parameters in real-time so that we don’t have to change the code every single time. After designing them and developing Gerber files, centroid files, and BOM, the manufactured PCB was ordered from PCBWay and it turned out to be as perfect as it could be as shown in the picture above and helped in making this project successful.

To have more information about how you can order through PCBWay and their process, you can read – High quality and low-cost PCBs at your doorstep through PCBWay!

In this Arduino-based project, a control board is developed which can be programmed into five different scenarios i.e. follow me, line-following, sumo, drawing, and obstacle avoiding as explained in the later sections. It uses an ATmega328P microcontroller and an L293D motor driver so that there is no need for another shield to drive the motor.

The scenarios included in this project are-

SUMO mode: In this sport two opponent robots push or attempt to push the other robot out of a specified circle just like it is done in the sport of sumo.

Follow Me Mode: It senses the presence of an object which is to be followed. This is achieved by using the HC-SR04 sensor.

Tracking Mode: A line follower is a robotic vehicle that follows a particular drawn line, either a black line or a white line.

Avoiding Mode: This robot, also known as an obstacle avoiding robot is an intelligent device that automatically senses the obstacle or disturbance in front of it or in its way and avoids them by turning itself in some other direction.

Drawing Mode: This robot has a servo motor and a pen. This is used to draw movements on the surface provided.

The following components are required for the above project:

LED stair light (without fade) by SmartHome yourself

In this Arduino-based project, an LED stair light is developed which is motion-controlled. Whenever the sensor detects motion, the staircase lights up and goes off once the motion signals are no longer received. This particular PCB, ordered from PCBWay is designed for a flight of 16 steps and the detection of motion is achieved through PIR sensors. An optional animation in walking direction can also be obtained through this project. 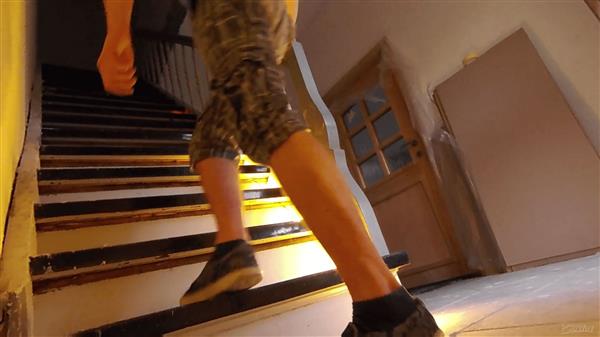 The project software can be configured according to the needs of the user. Some examples of configurations available at the customer end are – 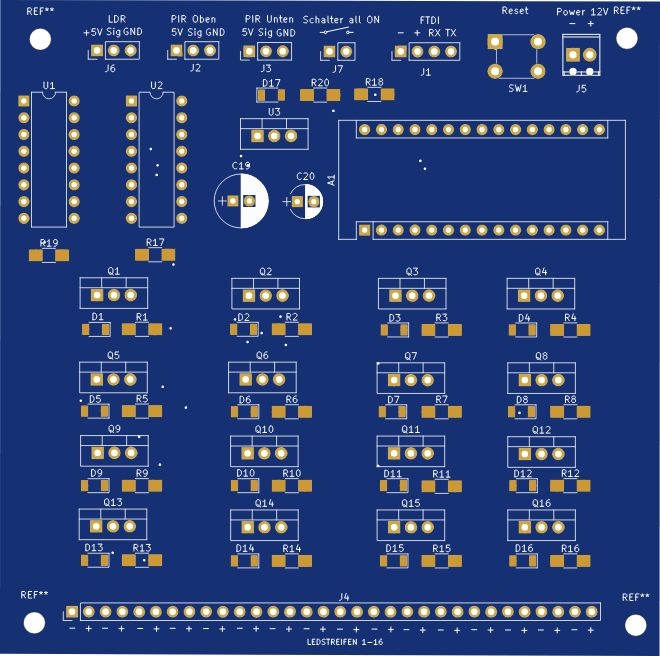